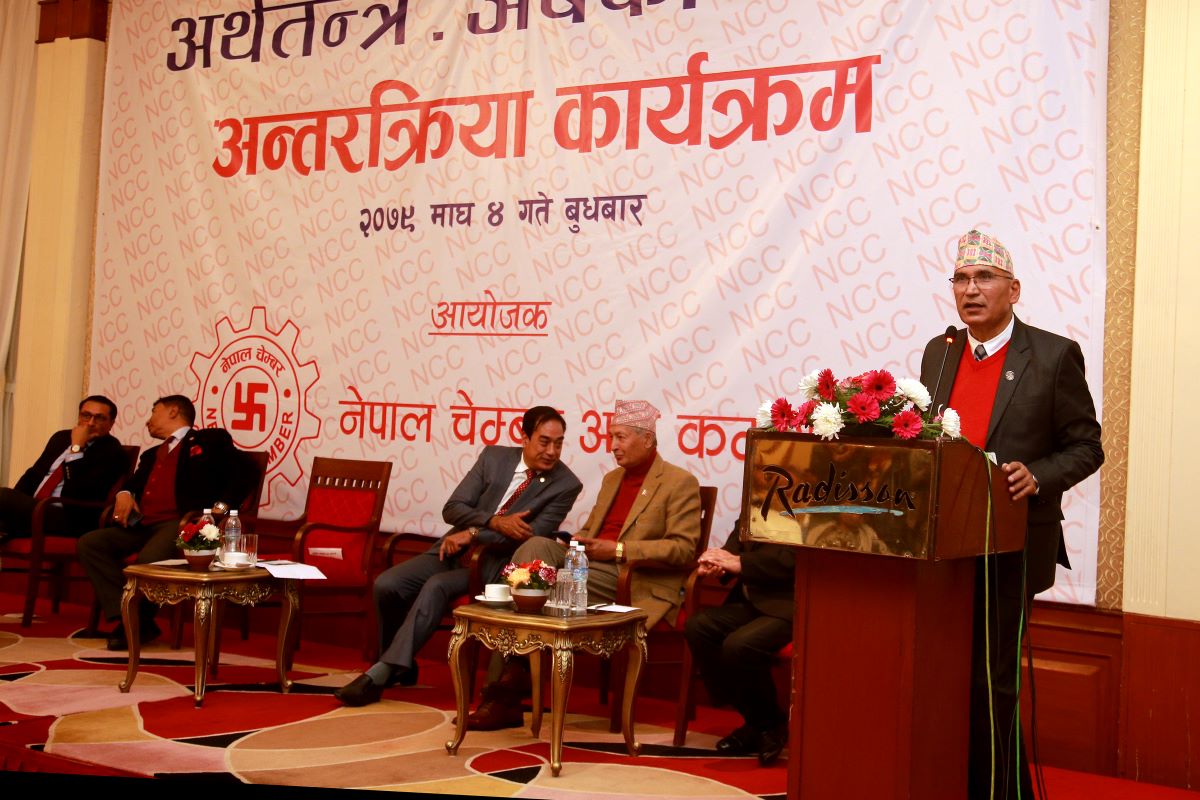 Kathmandu, Jan 18: Deputy Prime Minister and Finance Minister Bishnu Prasad Poudel has said the ministry was working to identify the problems facing the national economy. Concrete plan and programmes will be forwarded after identifying the problems, he added.

Speaking at an interaction on ‘Economy: The Way Forward’ organized by Nepal Chamber of Commerce here Wednesday, Minister Poudel viewed although Nepal had faced huge problems in the past as well, the economy had not shrunken to the extent we have today. “Nepal has already braved the difficulty- earthquake, and border blockade. We faced willy-nilly. We have no more effects of border blockade or earthquake, but question arises how we reached this disappointing stage of economy.”

He further viewed reasons behind the economic shrinkage are being studied. The problems are therefore being analysed closely. “I’m for reliable and decisive solution of the problems,” Finance Minister vowed.

According to him, present government is facing worrying state of capital expenditure and revenue mobilization. Now, government works to widen tax net and make effective tax administration. The government is committed to maintaining fiscal discipline.

The Minister also urged the private sector to understand the problems government was facing.

He suggested the government that it brought to track the economy along with balance in fiscal policy and monetary policy. “There is no point in rejoicing the increase of foreign currency reserve by reducing the goods that help create capital in the country. Initiatives are essential to up the domestic products,” Dr Khatiwada suggested.

The former finance minister also recommended that the government effectively implemented the hedging system to bring in foreign investment.

Moreover, former vice chairperson of the National Planning Commission, Dr Swarnim Wagle, said Nepal needs to forward its economy in an informed manner as the world was predicted to face challenging time in 2023. The financial account of government should be robust, he said, adding, “Financial liability created by the government employees and society security is taking toll on the economy.”

According to him, it is time to identify the sector of comparative advantage and what are the goods to be sold.

At the programme, Chairperson of Nepal Chamber of Commerce, Rajendra Malla, demanded concrete actions from the government to resolve economic problems. He argued there was no relevance of agricultural loan. Low revenue, low agro product were serious, he said, urging government to assist in branding handicraft items and promote tourism and develop a hub of information technology.